It's a tossup. I can't tell you which I love more, music or woodworking. I can tell you that I've long accepted the fact that I'm more gifted in working wood. People seem to enjoy my work in this craft. People just endure my music (hearty chuckle).

Since my teens, my favorite musician has been a Christian folk artist by the name of Derek Webb. There have been times when it seemed that Derek was reading my thoughts. Ever experience that? 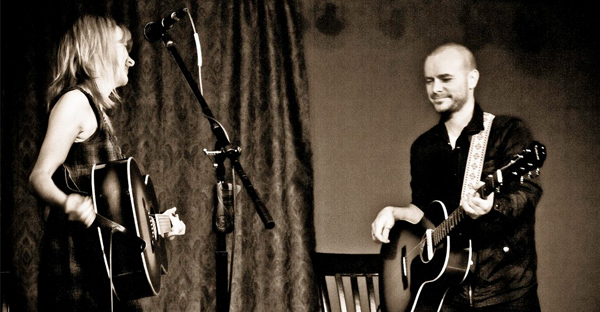 When my college roommate and I were wondering if we'd ever meet someone, we sang along to: "How we just hate being alone. Could I have missed my only chance."

When my Step-dad took his own life, Derek's words ministered to me in the song, "Center Aisle," where he lamented the loss of a friend in the same manner.

When I was scorned by the leadership at a Christian college, and convinced myself that I didn't need the church, Derek's songs brought me back home: "You cannot care for me, with no regard for her, if you love me you will love the church."

When I was fed up with Christian legalism, I was singing, "Don't teach me about moderation and liberty, I prefer a shot of grape juice."


One of Heather and I's most treasured date nights was a "House Show" in Omaha. Basically it was Derek, his wife Sandra McCracken, and about forty others just jammin' in a basement. Their duet "Watch Your Mouth" has been therapeutic for our marriage.


In a healthy way, I felt like Derek was "my guy."  He was on the same journey I was on, he just happened to be more gifted in articulating it. He had a way of letting the Holy Spirit take hold of it, and turn it into music. I can't tell you the number of times I have been working in my shop, or driving down the road, when the words, the Spirit, broke me down to tears. Lots of truth, conviction, and growth. That's where the healing begins.

Then, the "D" word. We got news that Derek and his lovely wife were getting a divorce. Worse yet, the implication was that Derek had been unfaithful.

WHAT? How does this happen? A devout man of faith, married to a beautiful Christian musician? Derek, what in the H-E-double-hockey-sticks were you thinking?

Yep, I was angry. I was steaming ticked! Then, I was so.....so.....sad. I mourned for his sin and for what I knew it would cost him. Later, I was frustrated that he never really talked about it.  Just a public announcement and we're back to being musicians?  Did he turn his back on his faith?

I couldn't listen to his music anymore. I couldn't read his posts. We had been going down the same road since high school, but I wasn't following him down this tangent. No sir.

That was a couple ago. Today, on New Year's Day, Derek finally talks through a facebook post:

"on failure, liturgy, and new years

i have thought for a long time about how, when, and honestly if i would write this. but with some time and healing behind me, and the start of a new year, i felt that it was time.

as i’m sure you know by now, my wife & i divorced a little over a year ago. at the time, we put a lot of thought into what we considered an appropriately benign and simple statement which we released together announcing this sad news. a very good and wise friend, someone who has also gone through some hard things publicly, gave what i consider valuable counsel: while your instinct, and people’s expectation, might be to go into a lot of detail in what you share publicly about a situation like this, it’s very rarely a good idea. but with some perspective and much personal health and growth over the past year, it now feels incongruent to leave the subject unaddressed publicly.

i can imagine that many of you felt and maybe still feel confused, disappointed, angry even, at hearing the news of our split. there was an understanding, a trust, broken between you and me. i’ve heard it said that trust takes years to build and seconds to break. my hope is that this writing might be the first step towards rebuilding that trust.

in the brief statement that was released about our divorce, it said that i took full responsibility for the events that led to the decision. that is true, but i want to take this opportunity to say more.

or, more simply said: i was a fool. i believed lies, which led me to tell lies.

this is why temptation is so tempting. it’s insane how quickly it becomes rational and reasonable to believe and do destructive and evil things. as much as i wish i could, i simply cannot change what i’ve done, nor the resulting consequences. i can only own these despicable actions, which have left me completely devastated and deeply ashamed. sometimes, no matter how bad you want it or how hard you fight for it, broken things just can't be mended. the only path forward from here is to continue focusing on health & healing, my children & parents, and investing in safe community.

that brings me to one of the most important things i can emphasize. through what’s easily been the hardest few years of my life, many friends left, a precious few stayed, and some new friends showed up for which i am so grateful and without whom i might not have survived. for most of my life (and certainly as these events transpired) i have been dramatically under-resourced with people around me with whom i have been truly vulnerable, who really knew me. the importance of having a handful, even just one or two safe people in your life with whom you can and do truly share everything, especially the hardest and most shameful things, cannot be overstated. i see this as one of the most important and life-altering changes that this devastation has brought about in my life. although it took time, i found a wise therapist, several groups of men with whom i spend regular time, and a handful of friends who i consider to be among the best i’ve ever had.

i would plead with you to find a small group of safe men or women, friends who will not respond with platitudes of morality but will instead get down and not only join you but stay with you in your shit, in hopes of helping pull you out. inevitably, they’ll need you to join them in theirs someday.

you might be a man or woman reading this even now, finding yourself exactly where i was two years ago, seriously considering choices that could destroy your life, your family, and maybe yourself. if that’s you please listen to me: what you think you want, what you think you can have, is not real, and you’ll lose real things pursuing it. as an unfortunately and extremely reliable source, please believe me.

so, if you’re standing on that steep ledge, STOP. DON’T DO IT. at very least, risk telling someone immediately and give opportunity to hearing some understanding and perspective, maybe some sanity restoring words that might be the small disruption needed to shake you awake. tell the whole truth and keep telling it. your marriage is worth it. your future is worth it.

the tone & spirit of the songs i've written over the last decade or so have sometimes been called “prophetic,” a term that i've worn with extreme discomfort. but it turns out my songs have been eerily prophetic in my own story. for years i've borrowed this language from ezekiel:

'i am a whore, i do confess, but i put you on like a wedding dress and i run down the aisle.'

hard as they have always been to sing, i am especially grateful to have those words to confess today, as i’ve never known them to be more deeply true of myself as i am running down that aisle still.

there has always been some measure of distance between me and the content of my songs. there's a sense in which even the most confessional of my songs, like 'wedding dress' or it's more recent sibling 'heavy', felt like they were about someone else. so, the accidentally prophetic sting of those songs is especially acute and painful in light of my great failures. songs like those have never been more difficult to sing, but i've never been more grateful to have to.

i’ve said recently that my songs feel like my personal liturgy, things that i don’t necessarily or always believe but i show up to recite again and again in hopes of believing them. if i'm honest, most of the time i don't believe the words in my songs. i have a hard time believing in a God that could make, let alone love a man who could do such things. so, i’ll go on reciting and adding to my liturgy in hopes of believing the words, because i wish to. more than ever, i wish to."

Bam! That's how it happens. I'm an arrogant fool for believing that it could never happen to me. I'm the hypocrite for "judging by a law that even I can't keep." Daily I say and believe truths that I struggle to live up to. But oh how I want to!

All these things on my mind today as I cruise down the road in my swagger wagon, Compelled, I find Derek's music deep in my archives, and sing along once again....

"i repent, i repent of parading my liberty i repent. i repent of paying for what i get for freeand for the way i believe that i am living right by trading sins for others that are easier to hide i am wrong and of these things i repent
i repent judging by a law that even i can't keep of wearing righteousness like a disguise to see through the planks in my own eye"

But this time I have to pull over, because the tears escalate to sobbing.

Lots of truth, conviction, and growth. That's where the healing begins.