Yikes! It's been a couple months since I've posted a darn thing. This summer I accepted a new job in management with the railroad, which involved relocating to a different part of Iowa. So, new job, new house, new shop... it's almost set up and ready to roll. In other words, I've been a little busy.

That said, I want to jump back and blog a cool project that I collaborated on with one of my best buds back in Council Bluffs. He's a painter who specializes in faux finishes and the like. One day he got a hold of some nice reclaimed barn wood and we started kicking around ideas for a dining table.

Over a couple of Newcastle Ales we narrowed down dimensions for the table. We also goofed around on the interwebz a bit looking for ideas. Per my usual, we stole various design aspects/ideas and came up with something we liked. With this particular lumber, I had the challenge of making odd-shaped, not-so-uniform boards and timbers and working them into the design and joinery. It all worked out pretty well......and here's how I did it. 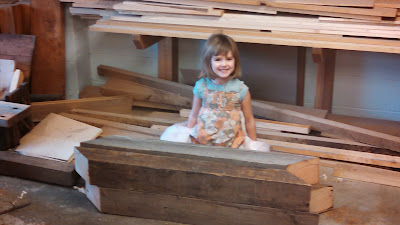 First, I found a cute little helper to aid me in cutting all the stock to rough lengths. Then, I made an solid effort at getting all the metal/nails/rocks out. However, I realized when I started this piece that it would likely trash a pair of planer knives.

So, I ran the tabletop boards through the benchtop planer for a couple skim passes. Then I trued up an edge on each board on the jointer, and moved toward glue-up.

I realize that folks might not want to remove some of the "grey" or weathered for all barnwood projects. However, this is going to be an eating surface in which we did not want voids. Plus, we can always add the grey back. You'll see grasshoppah. 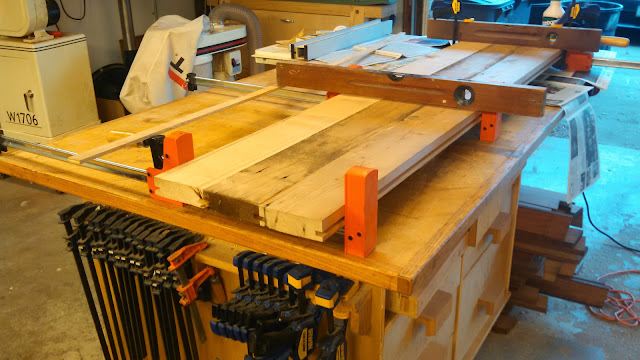 In the glue up picture above, you can see I ripped a groove in each long glue edge (dado blade). For splines I ripped some 1/2" plywood strips. This helped with alignment during glue up, not to mention added strength. 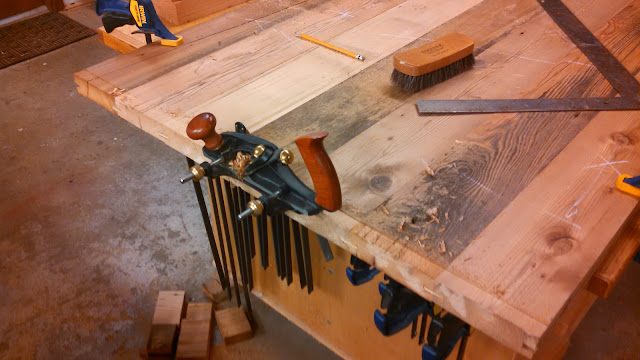 Here I'm making that tongue for the breadboard. To be honest, I made one with the skew rabbet plane.....then I pooped out and made the other with a 'lectric router. 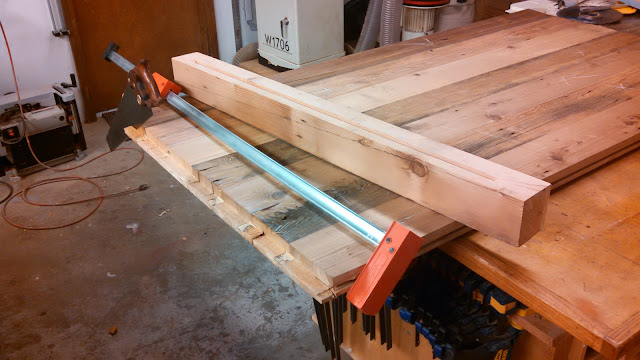 Here I'm test fitting the breadboard. I made the groove with a dado blade on the tablesaw. Stopped cuts can be spicy on the tablesaw, but the soft pine made this one a cinch. 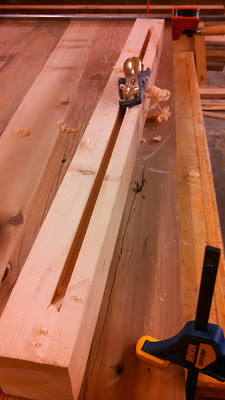 You can also see that the 4" breadboard is twice as thick as the 2" top. This really started as a design decision (to make the tabletop appear thicker), Plus, I didn't have enough 4" stock to make the entire tabletop, so I worked it into the joinery as well. Here's how: 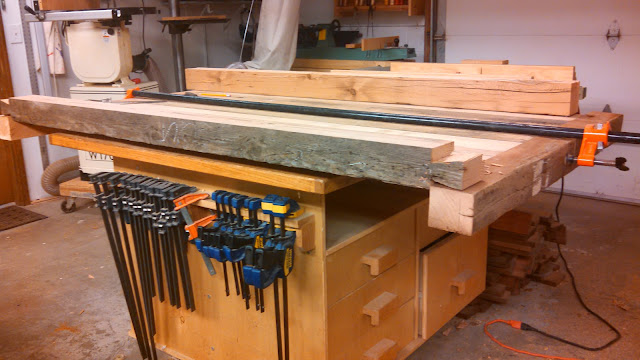 I marked and cut dovetails on the two 4" outer side pieces. Keep in mind this dovetail will be free-moving. This tabletop will expand and contract quite a bit seasonally, so don't glue the dovetails. 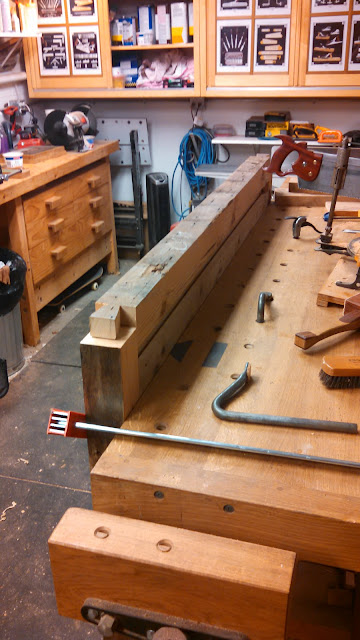 Above I am transferring (marking) the shape of the dovetail with a knife line. 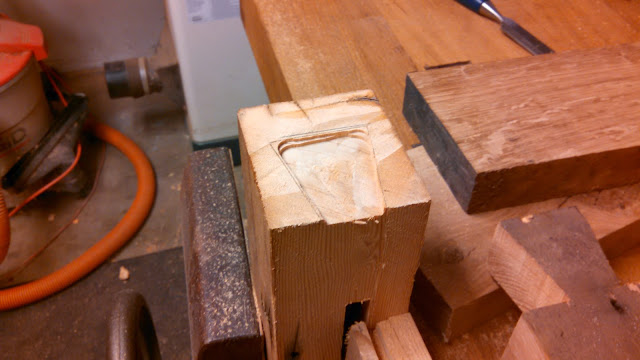 With a knife line well seen, I put a straight bit in the router and took shallow passes freehand...just close to the line. After this pic, I busted out a chisel and pared away to the knife line. This establishes a nice shoulder for the next step: using a bearing guided bit. 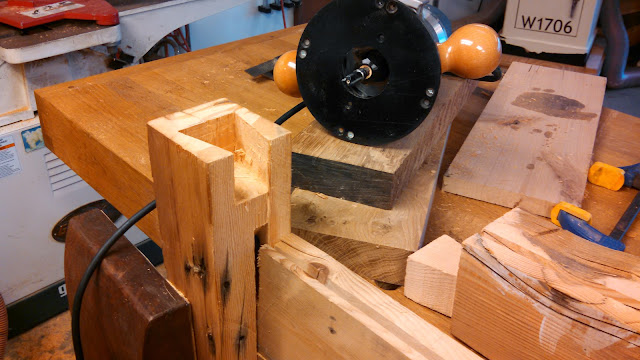 Now, I didn't remove all the waste with one pass. I had two different lengths of bits, and I extended them each a couple times. You don't have go the way of the 'lectric router. You could just drill and chop out the waste. Lots of ways to go about it. 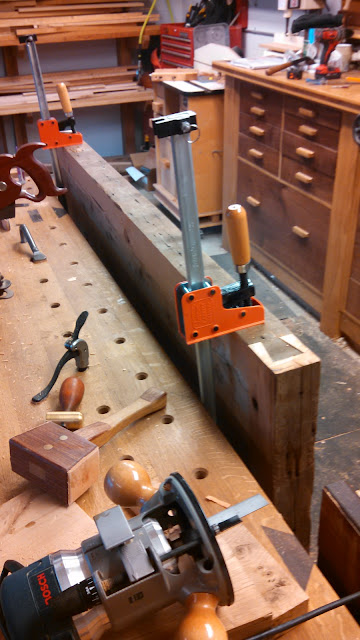 Tough to see without x-ray vision, but I did glue the entire long edge of the long side piece, then clamped it into place. 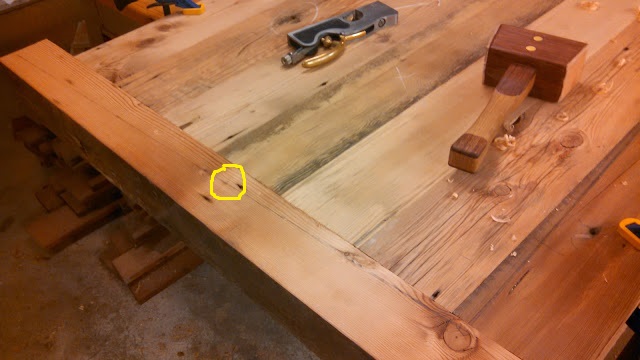 With the breadboard in place, I drilled one dowel through the center. The tabletop is free to expand and contract across the grain. Last, I sawed off the excess length of the breadboards.

Well, I've heckuva tabletop built at this point. Next blog I'll show how I built the base and how my buddy did the finish.