Make the Best of It

The Lord's timing makes me smile sometimes. This week I'm teaching our youth group about Joseph. Specifically, Genesis 37, where Joseph had some crazy dreams that he would one day be blessed by God and rule over many. His brothers, in a jealous rage, ripped the 'coat of many colors' off his back. Then they tossed him in a cistern and left him for dead. Alas one brother had the idea they could make some money off the deal so they sold him into slavery instead.

Of course, I didn't experience anywhere near the trauma Joseph did as a seventeen-year-old boy but I've always drawn hope from his life. Pondering this, I made some notes and applications that would work in speaking to the youth of our church. I even shared with our pastor about a "Joseph moment" I had the day I left for college. I remember that day vividly. I've told my wife for years how that drive was a major turning point in my life. Wouldn't you know it, the day after I shared that story with pastor, my mother sent a birthday card with a few photos. One of which was this: 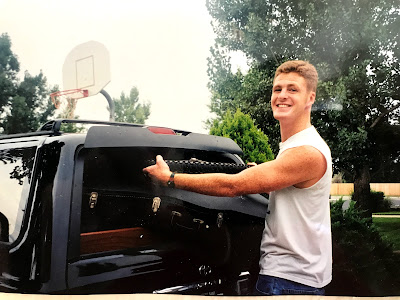 That's me, the day I left for college. I had no idea there were pictures of the occasion. Notice there's a guitar and ton of stereo equipment but no sight of clothes or clean sheets. Ha! I was known to rattle the walls of our dormitory.

If you've read my previous blogs you'll remember that this was a bittersweet time in my life. My step-dad took his own life just two months earlier. Now as the youngest child, I was about to leave my mother alone after being widowed and empty nested in the same summer.

I'm not gonna sugarcoat it, I didn't miss my step-dad. He was mean-spirited and abusive. I can't say for certain if jealousy was one of his motives, but I know he never acknowledged any of my successes. Even as I was the starting center on our high school basketball team I can't remember Jack going to a single game. My only memories are Jack mocking me when I made the cover of the sports page.

Don't get me wrong, I didn't help the matter. I could be a cocky kid at times. I'm certain I gloated when I was upset with him. I would change that if I could. Other times I used Jack's ridiculousness as fuel. The more he told me I wouldn't amount to anything, the more I wanted to show him that I would!

A month after I graduated from high school, Jack took his own life on that mountainside. A few days later my mom and brother went to clean out his locker. You never would've guess what they found; newspaper clippings. All sorts of clippings from my basketball days taped inside the door. Dang that bugger. What a shame. Here this man had a boy in his home who desperately wanted a father, but he was so caught up in so many different sins that he didn't know how to be one.

Despite the raw wounds in our home, that fall I would go off to college with my mother's blessing.

"It is doubtful that God can
bless a man greatly,
until He has hurt him deeply"
-A.W. Tozer

Now you're thinking, "Wow, that's a very depressing story to share with a youth group." Maybe so, but the cistern, the false rape accusations, the time in prison are not what defined Joseph. Nope, perseverance did.

Soon after we loaded up that 4-runner and drove across the plains of eastern Colorado, I remember a peace coming over me. I recall thinking, "I didn't have the best childhood, but I know people who've had it worse. The opportunities ahead of me are what I 'dreamed of', but maybe I'm just gonna make the best of it. Ya, like Joseph, make the best of it."

When that Christian college was a bit of a disappointment when my degree seemed pointless because I wasn't called into the pastorate, when my wife and son were diagnosed with Crohn's disease, on and on. Each hardship was an opportunity to remind me: "God's promises are real. I'm not always going to understand this. Maybe one day I will, but make the best of it."

That's what Joseph did every step of the way. People kept trying to weave evil into his life and at each turn, he just rolled with it. He was the most trusted of all the slaves. He was basically running the prison from the inside. Then finally it was all to prepare him to be the vizier of Egypt and save many lives. Lord willing there may be mountain top moments later in life when we can say, "Ok, that's why I had to go through that. It prepared me for this!"

It's not easy. It's so tempting to medicate ourselves, shut off, or wallow in self-pity when it feels like our life is going all wrong. It's so easy to let little sins of jealousy and pride grow and engulf our character. So many kids in my old neighborhood went this route. It's no way to live, and it's all lies.

"Sow a thought, reap an action;
Sow an action, reap a habit;
Sow a habit, reap a character;
Sow a character, reap a destiny."
-Alistair Begg

By the grace of God I had a thought as a young man, that turned into an action, then a habit.... and it completely defined the man I've become. It can be the same for you.

That's what I tried to tell the young people in our church last night. We've had a tough few years in our youth group, but we're gonna make the best of it.